Congratulations to the 2016 Question of the Year on Sports SE: Why is field hockey played with water on the field?

Here are the final results: 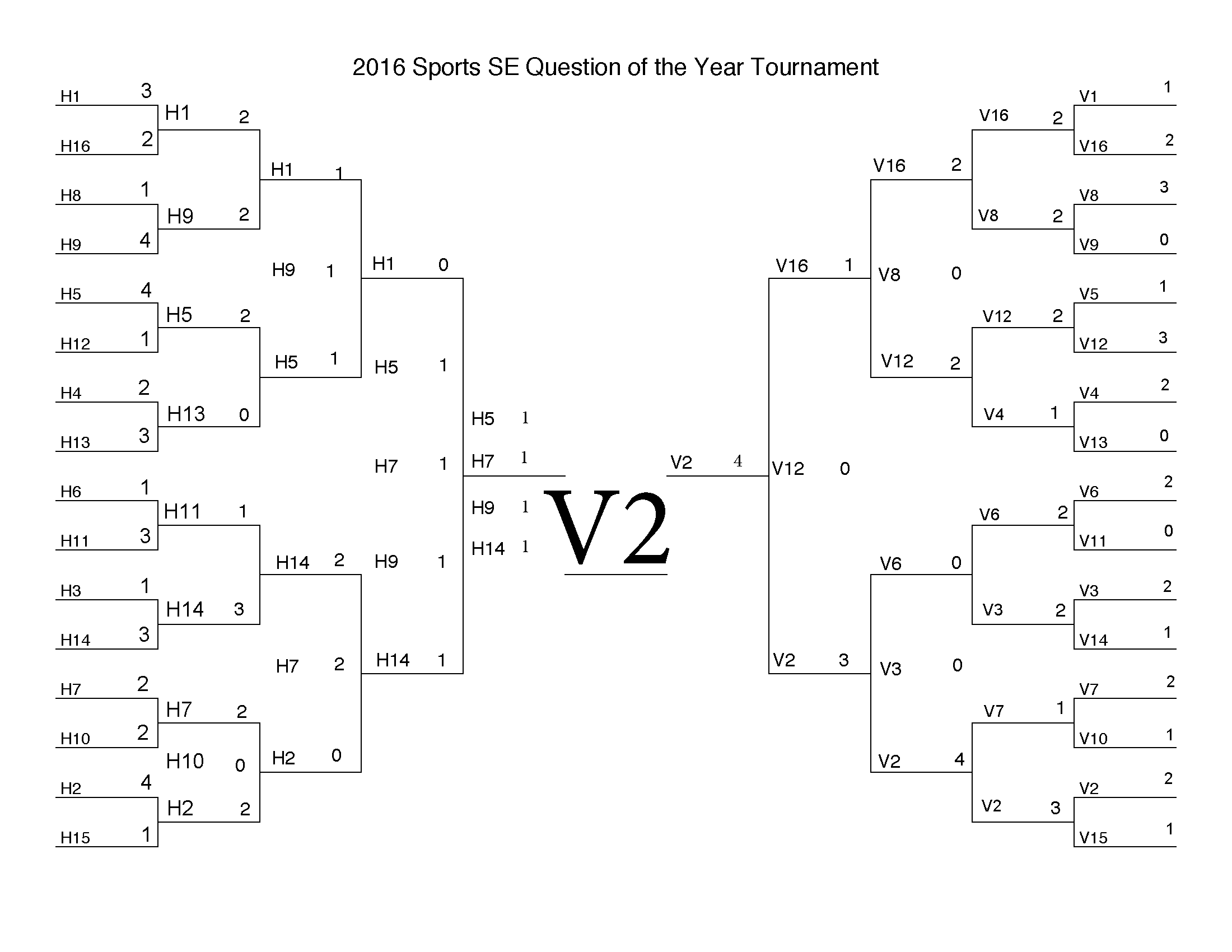 I want to use this post to "debrief" about this tournament.

For reference, the proof of concept can be found here: Sports SE Question of the Year Tournament - Proof of Concept

There were two primary reasons I attempted this tournament after conceiving it:

I will evaluate this tournament from these perspectives.

We had users vote consistently. We also had different users vote as the tournament went on. Huge shoutout to all who voted.

Expectation wise, I was expecting around 10 votes per question. We almost got there for the championship round, but our average vote count per question hovered around 3-5.

This is in no way reflective of the community at-large, but it would have been nice to get more of our "big names" to participate. Whether it was because of low interest, preference, not being a good fit for this site, or what-have-you, the support may go a long way. Again, this is not reflective of the community and the reasons are ultimately unknown. Addressing why would help. Perhaps what Sports SE is, as we know it, isn't designed for such an event, and that's fine.

We were literally one vote away per question from the Final 4 being against four teams instead of eight (due to ties). More votes would have highlighted great matchups in a greater degree and may have prevented the logjam tie scenarios we got. Admittedly, our tie-break scenario was conceived hastily: https://sports.meta.stackexchange.com/a/703.

The general perception (whether accurate or not) that older questions have already been looked at, voted, and improved as it sits otherwise idle. I noted during proof of concept that I wasn't familiar with a number of questions in the tournament and I see most questions coming in.

Some of these questions in this tournament are great questions. Some questions may be low quality and/or off-topic. Highlighting this definitely brings more eyes on these questions to improve and vote where necessary.

An example (albeit from meta):

This question sat with -4 votes since it was asked and addressed in October 2016. After an answer was added in March 2017, 3 upvotes were given to the question. What a change in perception.

A question had -7 votes, was addressed in meta about a year-and-a-half later, corrected flawed perspectives, and now sits at +4. A much more drastic change in perception after it was revisited.

Some swimming questions sat favorably for some time, but a number of them were eventually closed by the community in bulk. It led to this meta post that clarified and fortified our position that questions on Sports SE have to be about the competitive aspect of the sport and not just about the general activity.

Is this viable for the future?

Certainly. Addressing some of my points under "What can we improve upon?" would definitely help us understand how we can improve running this tournament in the future. I thought about having an all-time tournament, though that might be overkill.

During the tournament, I changed community events to only display the current round and to notify when the next round starts a day in advance. I felt this was a good move to desaturate our bulletin board.

I thought the setup (32 questions, 16 questions a division, 8 matchups per round/week, 6 weeks to complete the tournament) was digestible. I did overlook a week, but fixed that and moved on without a hitch (other than extending the tournament out a week further than planned due to my oversight).

Overall, I thought the tournament was a successful experience and again, huge shoutout to those who voted and made this possible.

11
Why has a question on swimming technique been closed as off-topic?
7
Sports SE Question of the Year Tournament - Proof of Concept
7
Why does this post have such a low score?
0
I believe this question should be reopened