Why has a question on swimming technique been closed as off-topic?

A while back I asked this question: Swimming: why can I not front crawl?

It was subsequently put on hold. The rationalisation was:

But swimming is a specific competitive sport.

Imagine I had asked a question about tennis technique: "why can I not hit a topspin forehand?" there would be no contention surely.

This is a direct parallel.

This rationale for putting the question on hold is illogical, contradictory.

Checking back weeks later, I see the question was closed. It boggles my mind that five people voted to close the question after my comment that clearly exposes a flaw in the logic.

Obviously there is overlap between the two sites, so should be done is look at the intent of the question.

I think that while most swimming questions that could be asked would be on topic at Fitness, questions about the activity in a competitive aspect would be also suitable for this site.

Some examples that I can think of that would be more on topic here:

"Why was the S stroke in freestyle phased out in favor of early vertical forearm and catch?"

"When executing a backstroke flip turn, is there an optimal depth to aim for?"

Both of those clearly relate to the racing aspects, rather than a recreational aspect. That would apply to many activities that have both a competitive aspect and a recreational/fitness aspect. If the intent is to improve the competitive aspect, then it's probably a better fit here. If the intent is to improve in general, then probably a better fit on fitness.

For the referenced question by the OP, I would agree that it would have been squarely on topic at Fitness, and in fact, we have a few questions already about sinking while swimming and getting out of breath.

When it comes to individual sports (running, swimming, etc) there is clearly a large overlap between Sports and Physical Fitness, as a lot of the techniques are exactly the same whether you're doing it competitively or recreationally.

As such, the close in this case is correct, as the question would apply equally to recreational swimmers.

In my opinion, swimming, running, weightlifting, etc. are not primarily sports. Questions about them should be limited to questions very specifically about the sport itself - the rules, for example.

Questions about physical fitness activities that also happen to be sports are not on topic here if they're questions that are about how to perform the activity generally. We're just not the site for that kind of information. There's no reason to have the overlap between this site and Physical Fitness. Our experts are experts in Sports, not in Fitness.

Questions in the gray area I don't mind keeping, but it would have to at least have some relevance to sport itself, and not just technique or form.

The Sports.SE site has been around long enough for its scope to be defined. It is clearly stated that in the help center what their scope is.

Sports Stack Exchange is for participants, hobbyists, and fans of all sports and forms of competitive physical activity. We welcome questions of all levels. For a non-inclusive list of example topics, click here.

For the Fitness site, there is overlap, and your question would be appropriate there. To quote from what's on topic for our site:

Physical Fitness Stack Exchange is for fitness professionals, athletes, trainers and enthusiasts. If you have a question about …

that I agree. The thread is too general to be specific currently on sports. The problem with such general questions meant to physiotherapists and real trainers is that it is hard to find focus. Swimming is not off-topic but it is off-topic to ask questions where it is unclear what is asked in the sports or it is too general to apply to most practioners of the sport: general beginner level questions requiring physiotherapists councelling are such questions.

There are four pieces of questions on a profile asking for help. A way it could be formulated here is to make it specific, find a single thing that you want to improve such as rotation of your torso, not all things in the same 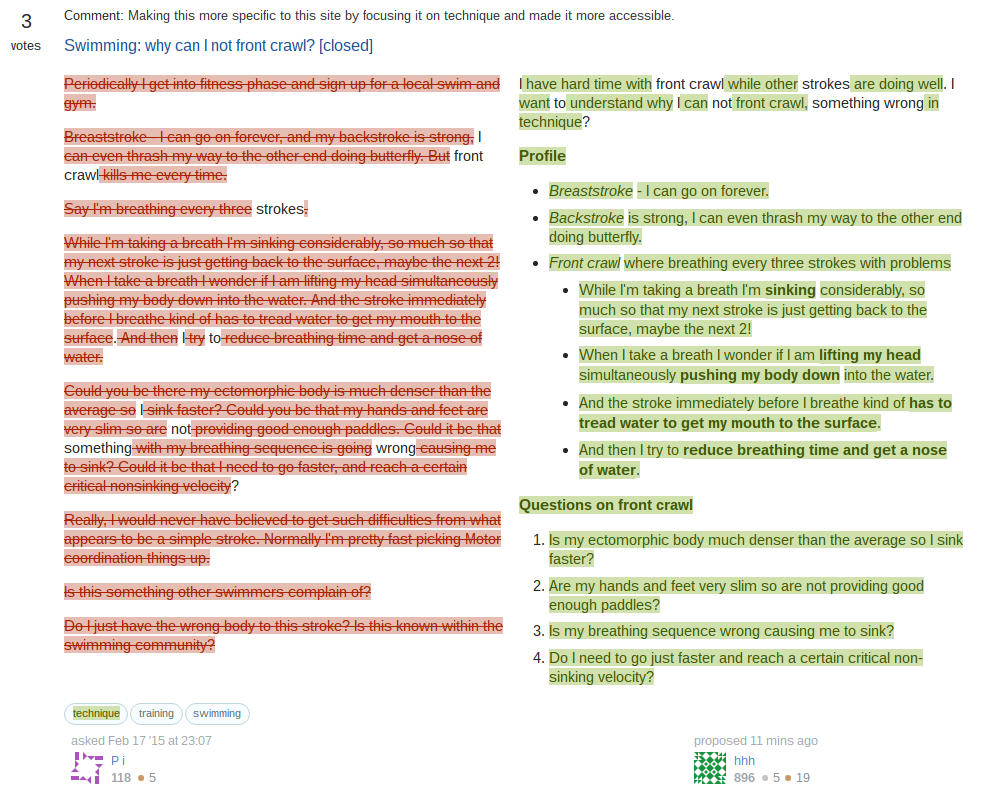 P.s. I tried to reformulate the question to be more on-topic on this site, I suggest to put this question on-hold while getting rewritten.

Not the answer you're looking for? Browse other questions tagged discussion .

12
Helping Our New Users Transition to Sports SE
8
Competitive or Recreational Running
9
2016 QotY Tournament Champion and Debrief
9
Guideline for on-topic questions on Sports SE regarding activities
9
How does Fitness and Nutrition, with Sports related questions, interact?
4
Are questions in the form/manner “Am I too old/young to start/pursue…?” on topic?
4
Are shooting sports on topic
-2
What buzzwords am I missing to not get my question closed?

8
Competitive or Recreational Running
1
Why has my answer to my own question been deleted?
7
“Off-topic for Sports, but you should try …” where?
6
What is the next thing to do with the (autograph-identification) tag?
7
Effects of 2018 World Cup on site traffic